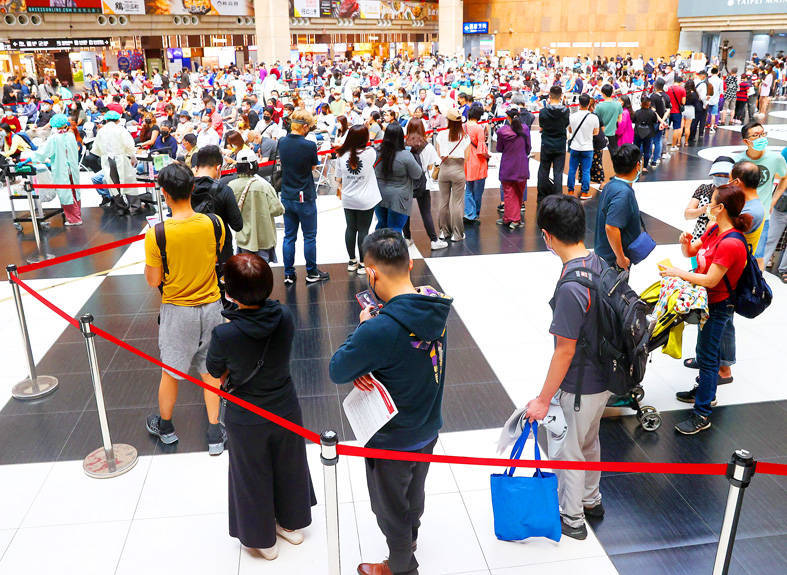 People line up for a COVID-19 vaccination in the main hall of Taipei Railway Station yesterday.

PREDICTION: Chen Shih-chung said it is possible that the daily domestic case count would rise to more than 1,000 infections a day by the end of this month

Centers for Disease Control （CDC） Deputy Director-General Chuang Jen-hsiang （莊人祥）, the CECC’s spokesman, said that as the number of domestic COVID-19 cases is continuing to rise, the polymerase chain reaction （PCR） test previously required upon ending home quarantine or isolation would be replaced by an at-home rapid test for increased efficiency.

He said the specificity of at-home rapid tests is as high as 99 percent, they are effective in detecting infected people who are contagious and they can be easily performed, removing the cost of transporting people to a hospital for a PCR test, as well as reducing the infection risk.

People need to be tested twice during the 10 days of isolation — between the fifth and seventh day, and on the final day — and twice in the following seven days of self-health management — on the second and fourth days.

The domestic infections are 162 cases in New Taipei City, 115 cases in Taipei, 61 cases in Kaohsiung, 53 cases in Taoyuan, 37 cases in Keelung, 31 cases in Hualien County, 26 cases in Taichung, 16 cases in Hsinchu County, 14 cases in Pingtung County, and one to nine cases in eight other counties and cities.

No new moderate-to-severe cases were confirmed yesterday, and 99.66 percent of the 4,415 domestic cases reported this year were mildly symptomatic or asymptomatic, he said.

Chuang encouraged people to download the Taiwan Social Distancing （臺灣社交距離） app on their smartphone to improve the efficiency of contact tracing.

CECC Information Management Division head Jian Hong-wei （簡宏偉） said users only need to download the app and turn on Bluetooth, adding that they do not need to register any personal information and that it does not collect any personal data from users, but will inform them if they recently had close contact with a confirmed COVID-19 case.

The center encourages people who visit public venues or events — such as going to a restaurant, market, pilgrimage or concert — to download the app first, Chuang said, adding that it would replace the contact tracing QR codes in the future, but it is not suggested for places where people stay for less than two minutes.

Separately, Minister of Health and Welfare Chen Shih-chung （陳時中）, who heads the center, said in a radio interview yesterday morning it is possible that the daily domestic case count would rise to more than 1,000 infections per day by the end of this month, and that the higher risk areas include Taipei, New Taipei City, Taoyuan and Keelung.

Chen said that the four cities could submit plans to the CECC if they want to carry out testing in relatively high-risk areas, and that 200,000 at-home rapid test kits could be offered for each approved testing program.