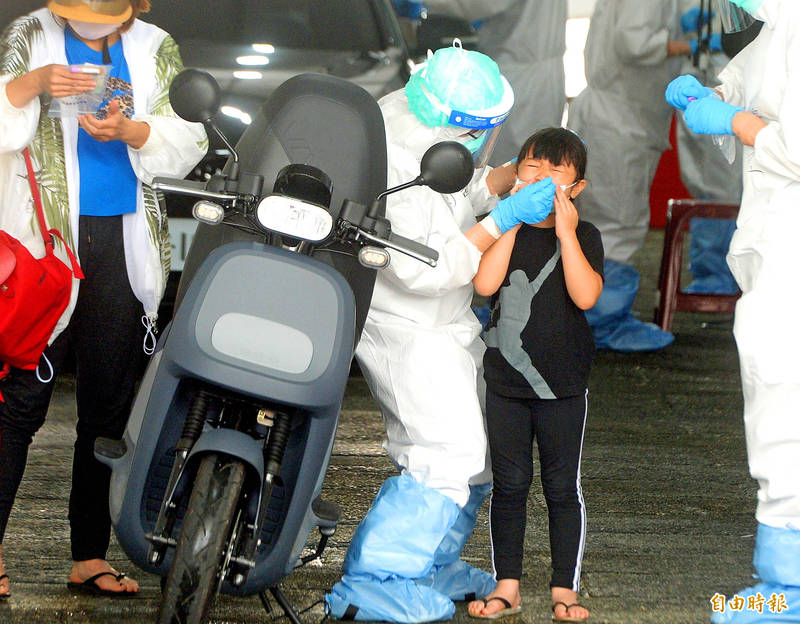 A child grimaces as a health worker uses a nasal swab to test for COVID-19 at a drive-in rapid test center at Chang Kai-shek Memorial Hall in Taipei yesterday.

UPS AND DOWNS: The nation’s total number of infections has surpassed 1 million, with 954,139 reported this year, but the situation could ease soon, an expert said

In a report to the legislature, the ministry said that Taiwan reported 475,497 new COVID-19 infections from Thursday last week to Wednesday, marking “a significant increase” over the 302,597 cases recorded over the previous seven-day period.

The rising case numbers indicate that the nation has entered the “mass community spread” stage of the disease, the ministry said, adding that imported cases have dropped in the last week, but “remain a risk.”

The ministry said in a statement that it expects the outbreak to peak this month, adding that it would work closely with local governments to prepare for any changes in the situation.

“Taiwan is on the road to living with [the virus]. The government will gradually ease strict prevention measures, while continuing to consider risk controls and maintaining public health capacity,” it said.

The trajectories of COVID-19 outbreaks in Asian countries have resembled “hills,” with multiple ups and downs, rather than a single and sharply defined peak, National Taiwan University Hospital infectious diseases specialist Lee Ping-ing （李秉穎）, who is the convener of the ministry’s Advisory Committee on Immunization Practices, said in a radio interview yesterday.

This type of epidemic curve is often the result of a stronger government response, as well as social behaviors, Lee said, citing Taiwan’s recent drop in restaurant dining and movie theater attendance as an example.

While these factors help prevent a collapse in medical capacity, they also mean the outbreak would last longer than in places such as Europe and the US, he said.

Taiwan’s COVID-19 situation would probably begin to ease around the middle of next month, although it could take an additional three to four months, possibly until September, before life returns to normal, he added.

Yesterday’s daily local caseload brought the total number of domestic cases to more than 1 million since the start of the pandemic in early 2020, the CECC said.

It reported 59 deaths, 31 of whom were unvaccinated.

All but one of those who died had chronic illnesses or severe diseases such as cancer, while the youngest among them, a man in his 30s, had a nervous system disease, it said.

The CECC added that 191 previously recorded COVID-19 infections had developed into severe or moderate cases.

As of Wednesday, 483 of the nation’s 954,139 domestic cases reported this year have been classified as severe infections and 1,541 as moderate, accounting for 0.05 and 0.16 percent of the total respectively, CECC data showed.

In all the other cases, the patients were either asymptomatic or had only mild symptoms, it said. 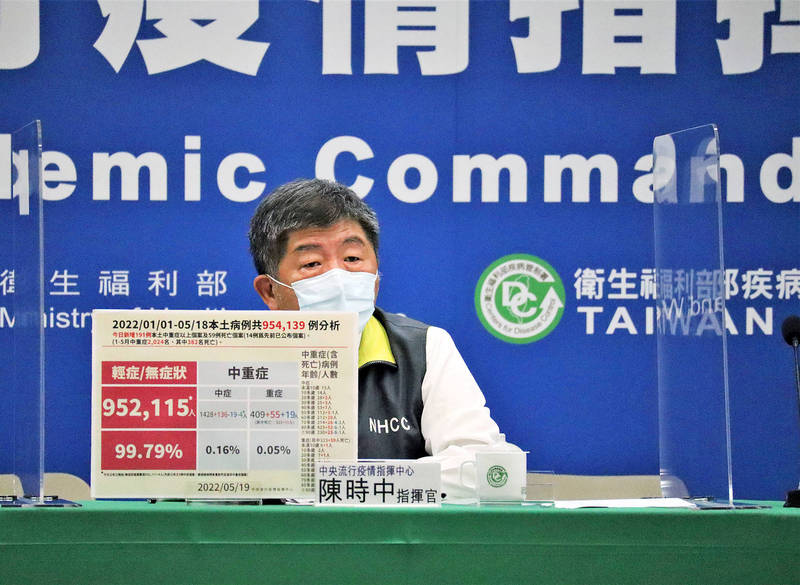